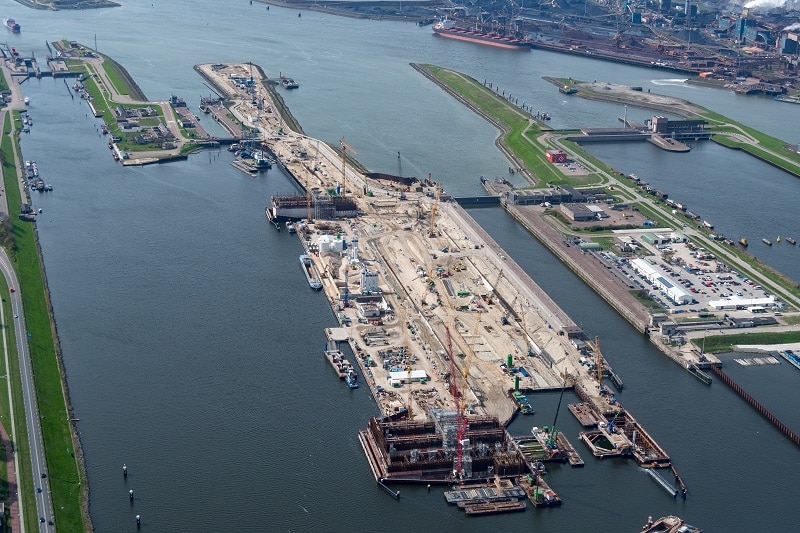 His Majesty the King officially inaugurated operation of the IJmuiden sea lock on Wednesday, 26 January 2022. With a push of a button, King Willem Alexander opened the inner door of the world’s largest sea lock from the Lock Operations Centre (SOC).

With this, the King officially gave the first ship, Bontrup Amsterdam, access to the North Sea Canal. There, the ship was welcomed by a fleet of vessels representing the nautical service providers and public parties in the port, such as the Pilotage Service, Svitzer, Police, Coast Guard, Royal Military Police, Customs, KNRM, De Koperen Ploeg and the Corps van de Vletterlieden (various repair and maintenance services).

Thanks to the new sea lock, the North Sea Canal Area, the ports of Amsterdam and the European hinterland connections will remain easily accessible for the next hundred years. The investment in this new maritime access will mean a significant improvement in accessibility on the main waterway network. The good accessibility of the North Sea Canal Area via the sea lock contributes to important transitions in the ports, such as the energy transition and the shift to a circular economy. With the arrival of the sea lock, these can continue to develop and expand, thus contributing to the necessary sustainability of the economy and society.

The new, larger sea lock replaces the Noordersluis (North Lock) dating back to 1929, which needed replacing after almost a hundred years. The IJmuiden sea lock is 500 metres long, 70 metres wide and 18 metres deep, making it the largest sea lock in the world. The depth of 18 metres enables ships to use the sea lock from the sea side independently of the tides and to sail smoothly and safely to the Amsterdam Port region. As a result, the ports are accessible 24/7 via the sea entrance at IJmuiden. Sailing through the new sea lock can be planned better and is more efficient. This makes vessel traffic more predictable and therefore the service more reliable.

Sea lock as a water barrier

The sea lock towers above the IJmuiden lock complex. The reason for this is that the sea lock is built at a flood-defence height of 8.85 metres above sea level. Thus, the lock is prepared for the rising sea level and will contribute to dry feet in the north-western part of the Randstad in the future as well. Selective extraction The Selective Extraction measure is an important part of the IJmuiden sea lock project. More salt water flows into the North Sea Canal through the sea lock than through the Noordersluis (North Lock). In order to protect nature, agriculture, horticulture and the drinking water supply from salinisation, a solution has been found in the selective discharge of this salty water via the Spui- and Gemaalcomplex IJmuiden. To this end, the Dutch Directorate-General for Public Works and Water Management is building a dam in the Binnenspui Canal, north of the sea lock, with an opening at the bottom. Since salt water is heavier than fresh water, only the salt water from the deep water layers is drained off to sea through the opening, thus maintaining the quality of the water in the North Sea Canal and the surrounding areas.

The construction of the IJmuiden sea lock started in July 2016 and was completed in August 2021. An intensive period of inventive building, where space was limited. During construction, vessel traffic could continue to pass through the lock complex via the existing chambers. In order to avoid inconvenience on the road, all the materials and equipment were transported by water. Due to the limited space and the adjacent lock chambers, vibration-free construction was the main objective.

At the lock, everything is big. For example, the two operational doors and the spare door each weigh 3,000 tonnes. They are the size of an apartment building, measuring 72 metres long, 11 metres wide and 24 metres high. For the construction of the lock, 300,000 cubic metres of concrete were used for, among other things, the walls, the floor and the gate chambers. The concrete was produced by an in-house concrete plant on the building site. A total of 4.5 million cubic metres of soil has also been excavated.

After construction was completed, a period of practice and testing of the lock followed last autumn. In this project, the Dutch Directorate-General for Public Works and Water Management tested the sea lock together with the operators of the Central Nautical Management, the (ship-) towing services, the various repair and maintenance services (they moor the ships in the lock), the pilotage service and the emergency services. An important part of practising with the lock was to experience the currents in the chamber and the forces that occur on the hawsers due to the exchange of fresh and salt water.

A look back on the opening ceremony

In view of corona and the measures in place, there was a small gathering during the official opening. This took place in the Lock Operation Centre in the presence of parties directly involved.

After the official opening, His Majesty the King spoke with the builders of contractor consortium OpenIJ and local residents, among others. The King also spoke with operators of the lock and representatives of the port business community. In order to involve everyone as much as possible, the opening ceremony could be followed via an online stream at www.openingzeesluisijmuiden.nl. In the coming period, interested parties can watch the opening ceremony here.

The IJmuiden sea lock project is a partnership between the covenant parties Ministry of Infrastructure and Water Management, the province of North Holland, the Municipality of Amsterdam together with the Port of Amsterdam and the Municipality of Velsen. Contractor consortium OpenIJ (BAM-PGGM and VolkerWessels) built the sea lock for the Dutch Directorate-General for Public Works and Water Management. OpenIJ will also be responsible for maintenance for the next 26 years. The project is co-financed by the CEF (Connecting Europe Facility) foundation of the European Union. 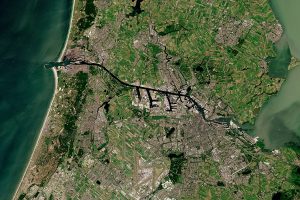 Eurotank Amsterdam (ETA, part of VTTI) is investing in the storage of biofuels. After a successful trial, the gas oil tanks at the terminal are being converted. This makes the tanks suitable for storing various types of biofuels. These biofuels, including Hydrotreated Vegetable Oil (HVO), are produced from used vegetable oils and animal fats, among […]